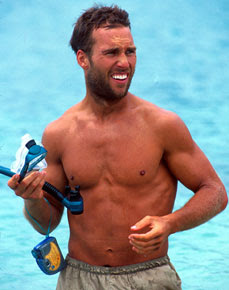 Katitude won immunity by running the deepest of all the contestants.


*someone may have not voted since there were already enough votes to kick off Goat. Normally votes go to the player who didn't vote but when that player has immunity votes automatically go to Numb.(new rule)

Peace out
Buddy
Wow, on one hand this was terrific news as Team Donkey really did split. They could have just picked us 4 team fish off 1 by 1 til it was just the 6 of them left. On the other hand I did get 3 votes from the team donkey strongholds, so I couldn't rest too easy. The next email we got from VJ was:
Hi Guys!!! We did it! We now have the majority and we need to figure out who the next person is that we vote for.
See email below and tell me what you think.
I was hoping we could vote off Heff and JamyHawk would vote with us, but it seems from the email below that he's not really with us.
Should we vote Heff off next or JamyHawk? I can go either way so let me know what you guys think. Even without Jamy we are 4 plus our friend from Team Donk makes 5. 9 peeps left and we have 5 WITHOUT JAMY. We have the majority even without Jamy so long as we stay together.

So who do you think we should vote for? Heff? Jamy? Kat?
Thanks,
Josie
Then this one:
Okay boys, word on the street is that JamyHawk is targeting Team Fish tomorrow night. He's trying to rally Team Donk for this and he wants me to go along. He says either iaatg or xkm.
I remain resolute that our best chance is to stay together. We FINALLY have the numbers in our favor so let's keep it like that.
I am now thinking get rid of Jamy Wed night who is def back with Team Donk, even though Heff is more of a threat poker wise. Whichever, we have to remain together in our vote.
Jamy Hawk?
If we vote him out, we still have us 4 fish, plus a very nice ex team donk member. We'll still have 5.
Josie
At this point I started thinking about the end game. Who do we need to take out that has the best chance of winning it all. I like Kat, but thought she would win a popularity vote if she made it to the final 2. So I replied:
Hey guys,
After thinking about it today I thought Kat might be our best vote next, but I can go for any of the former Donks if we still have the #'s and stick with our plan. I think we rattled them with the Goat vote. Let's keep them on their heels!
Stay together!
Boat
VJ was down with it:
I agree with Boat. Let's vote off Kat - Jamy still doesn't get xkm or iaatg and he may just rethink his plan now that Kat's gone.
I vote Kat!
Then I get this email from Jammy:
You wont go tonight. Or anytime soon as long as I can help. I explained to VJ that with us 4 voting together, no one can overtake our votes. We can go all the way to final 4.
You only got votes Sunday because Goat knew you and VJ are in an alliance and wanted to break it up.
We are good now. Kat is guaranteed getting our votes on Sunday.
Jamyhawk
So kat was voted off next, but I still got 2 votes. Jamy was next, as he has well documented on his blog. HeffMike was next to go. We were down to 6, and our core of 4 team fish seemed to be strong. That quickly changed during the voting in the next event as you can see from Buddy's email:
Our vote ended in a TIE!!! Finally!
Votes
Smboatdrinks - 3
BrainMc - 3

They will be playing a heads up match tomorrow night at 9pm EST. I'll announce the winner when we know more!
Buddy
I already made a post after the heads up match, so no need to rehash it here. Let's just say I survived and advanced in true Survivor form. So we were down to our Final 5, our original team fish alliance + Muhctim. Since xkm and turtle had turned on us they were the obvious ones to vote next, so turtle was next to go. During the next event Muhctim won immunity, but instead of sticking w/me & VJ, he voted w/xkm for VJ. VJ won her heads up match vs xkm and we were down to the final 3!
This was the most critical tourney, as the winner got immunity & was thus automatically in the Final 2. I put a bounty of $11 on both VJ and Muhctim if someone knocked them out before I was out. Muchtim got knocked out by Jamy, so it was down to me & VJ to see who won immunity. Now obviously VJ and I had our alliance since the very beginning & had promised to take each other to the Final 2. But this game messes with your head & you don't know what players have "promised" each other. VJ ended up outlasting me, but she did stick with her promise, and original alliance, and took me to the final 2. I would have taken her too, both because I had promised, but also because I thought it gave me the best chance of winning!
Very Josie played the game extremely well, but I thought I was going to win the final vote. In playing the game I think Very Josie rubbed some people the wrong way, so I was hoping to capitalize on that in the final vote. As we know I lost 7-6, and in addition to Riggs not getting his vote in on time, the 2 votes Josie got instead of me that suprised me the most were Jamy and Muhctim. Now I believe it was Jamy who said afterward that he would have voted for me if VJ had run the longest in the last tourney & thus winning the 40%. I guess I can appreciate that in that he wanted to be sure neither of us got shut out of the prize money, but it's frustrating to know I would have been champion of Donkey Island Season 1, and won the 60% if I had gone out before VJ.
Regardless it was a great run & tons of fun. Thanks again to Goat & Buddy!
Posted by SmBoatDrinks at 12:30 PM

First of all, great recap. It's still fun to read about what was happening behind the scenes.

I actually did NOT say I would base my vote on who went out first. I hated that VJ double crossed me, but it was my feeling that she was calling the shots most of the time (even though I may have been wrong). That's why I voted for her.

You both played a great game. That's why I asked who initiated the plan to vote me out. When your answers indicated it was VJ, I knew she was the one I had to vote for.

Great recap. FWIW I really didn't think you'd get close to as many votes as you got. I put you on a few.