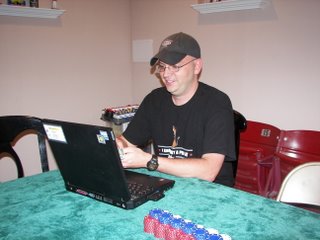 Friday night we did a home game at Smboatdrinks (<----Mike`s) house.


Bill (Illinifan) and Dave (dlpimpin) attended as well.
If it weren`t for the freaky roads and me getting lost there and back, it`s about a half hour drive. I was excited cause the first game was a HORSE tournament! I`d never played one live, and I thought the dealing would get interesting. Fo sho it did. Even for me and Dave, who were at the same table, we kept dealing two cards in o8.. pausing... oh damn here`s two more!The first round, limit HE, went smoothly, well if you call me doing my "disappearing chip" act smoothly it did. By the second round, O8, I hadn`t won a hand. In fact, I didn`t win a pot or the blinds until the SECOND FULL ROUND! And when I did, it was in o8 and I only got half thanks to Dave... ty Dave.

There weren`t too many hands to mention this first game. It was hard enough making sure everyone knew how to play each game.. hell even me keeping it straight was tough.I finally had to make my stand in o8 with Ah2hJc4c, but ANDY (oneloosecannon) in the BB called with his KTT3 and made a boat with his K3.. no low. He even got a twofer taking myself and the other short stack out that hand. GG Andy. 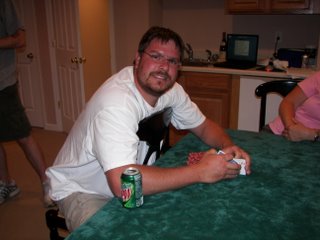 Bill made it to the "final table" with a crapload of chippies along with Dave. I didn`t keep full tabs on this table, I went out and chatted with the girls and watched Mike`s brazillian TVs he had set up down there. It was like a freakin sports bar! But I do know that Andy took good care of my chippies because Andy ended up winning!

Next game was NLHE and went much nicer for me. It was only one table. Mike took an early lead taking his wife (Molly) out the first hand, but I don`t think Molly minded. We had a LIMIT game start at 7pm.. I think it was after 12 when we started the 2nd game. Bill also took an early lead, but I was slow n steady coming in 3rd for $20 making me break even for the night. Mike ended up splitting w 2nd, but he had a pretty massive chip lead.

Overall, I had a great time and can`t wait for the next one! I always enjoy meeting fellow forumers and playin some good ol poker with people that actually know how to play the game!
Posted by SmBoatDrinks at 3:33 PM No comments:

Posted by SmBoatDrinks at 2:15 PM No comments: