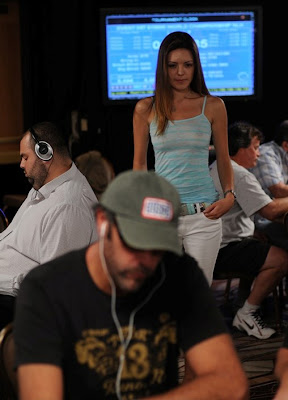 Congrats to Tony McGlone on his World Series of Poker Main Event Cash!!!!! He finished 174 out of 6,494 players in this year's Main Event, busting out yesterday, but winning $36,626. He rivered a flush, but his opponent rivered a full house to knock him out. Tony now has his own profile page!

"It was certainly disappointing when I got knocked out, but after an hour or so to process it and take a few looks at the check - I was OK.

I would expect that you will see me on TV a few times starting with Day 3 coverage. The big Day 3 event was when I knocked LA Laker Jordan Farmar out of the tournament.

Day 5 was also big as I spent a big part of the day sitting with Dan Harrington. I was also at the secondary feature table that evening and played a couple of hands with Antonio 'The Magician' Esfandiari.

All in all it was a great ride with many great memories."

I first met Tony two years ago when we were at the same table during the St. X tourney. We both ended up making the final table. I have since played with Tony at least 4 other times, including twice at his house. Tony lives in Maineville, just a mile from where I went to elementary school K-6.

(Note: You most likely will not find Tony in this picture, but IlliniFan should recognize at least 2 people, and I''m not counting Brad Garrett's girlfriend Isabella. I like her free flowin attitude!)
Posted by SmBoatDrinks at 11:40 PM No comments:

- IlliniFan has started posting his version of our WSOP trip last month.

- IlliniFan, Stormmrt, and I are starting a local poker league where we will send 3 players to the WSOP next year. We have 13 committed so far & are looking to get 18-20.

- Live poker tonight in Hamilton & Friday in Goshen. I need a couple strong finishes Friday, as I'm currently 3rd in the "Player of the Year" standings heading into the final events.
Posted by SmBoatDrinks at 3:35 PM No comments: