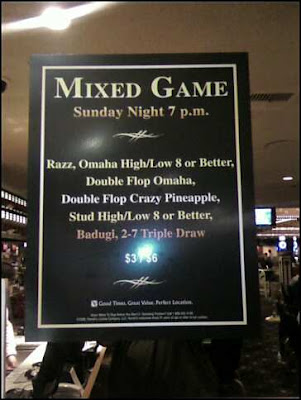 IlliniFan and I flew out to Las Vegas on Sunday evening June 20th. The direct flight from CVG is much nicer than any of the other options, especially when you can get it for ~ $300. The worst part of the trip was the long wait to check in at the Imperial Palace. While waiting in line we exchanged some texts/IM's w/friends from the online poker community (Zooks, T, Pred, etc.) in town and decided to try to meet up for a mixed game at Ceasar's Palace.

The room for the 1st night was on the 2nd floor and had a door right off the pool. It was a smoking room, so we ended up deciding to change. In hindsight, the smoke smell wasn't bad, and I think it messed our karma up giving up the pool side room. So after gettting our room and dropping our things off we headed across the street to Ceasars. We added our name to the mixed game interest list and got some pizza in the food court (and 2 for 1 Corona's!).

After eating we were told our the other mixed gamers were back over @ the IP, so we headed back across the street. Once we were there they were nowhere to be found, but the game was running so IF and I sat down. One thing that changes from the previous year is that the IP moved their poker room closer to the front door. This is ok except now you can't sit at the bar and still hear your name called, as I found out a couple days later.

Every Sunday night at 7PM the Imperial Palace poker room spreads a 3/6 Limit Mixed game. Due to word of mouth, the game often spreads on two full tables, and always goes all night long. The longest it has gone is 23 straight hours. Imperial Palace has gone out of their way to support the game including: professionally printed poster on the poker room wall advertising the game, professional flyers detailing each of the games spread, and a 10%/$3 max rake (with no jackpot drop). Players also earn $2 per hour unlimited comps on their Total Rewards players card.

The game includes 10 different poker games in a pre-set order:

This game was a lot of fun and highly recommended after a long day travelling in. It was the first time I played several of these games live and we had a good table. I sat down with $100 and after a few hours cashed out $60.

On Monday, Pred picked us up in his rental car and we headed over to check out Aria in the new City Center complex. It took us a couple tries to finally find the self-parking garage, but once we got inside Aria is very nice. We met some friends of Pred and Josh at the Sports Book and ordered some lunch. I lost the 1st round of credit card roulette, so the cheese steak and fries didn't taste quite as good to me with the heft bill!

After lunch we headed downtown, as IlliniFan, Pred, Dave, Josh and I were playing in the Binions PLO8 $210 Tourney that started @ 2:00 PM. I had decided that if I Final Tabled the Binions event then I would play in the WSOP $1500 event the following day.

IlliniFan and I had 10% of each other, which is typically +EV for me as IF runs goot whenever I have a piece of him! There was a good turnout as this was basically PLO8 week in Vegas. Unfortunately 3 of us started at the same table, as I was in seat 9, Pred in seat 7, and Dave in seat 6. Suprisingly, Pred was the 1st of our group to get knocked out as he got wrapped up in a crazy hand where he and his opponent both flopped boats, but his opponent riverd a higher boat. Dave was short stacked almost from the start, and next to go out. I made it through a couple breaks and then went out 80th just a few minutes before the dinner break. Got it in preflop w/AA108 suited vs 101084 and the same Crasian that took Pred out hit the case 10 on the flop.

I hung around for the dinner break to grab some food with IF @ the Golden Gate Diner before grabbing a cab to meet Lightning36 @ Bally's. It was great to meet and play some $1/2 NL hold'em with Lightning. I bought in for $300 and was up and down for a few hours until the last hand of the night. The Eurodonk straddled, so I was 1st to raise it up with 7, 8 suited! Got 2 callers and the flop came a near perfect 3,7,8. 1st guy checked, I made my continuation bet, 3rd guy called, then 1st guy check-raised all in. I told the guy next to me if he's got pocket 3's I'm gonna pay him off with my top 2 pair. So I went all in and then the 3rd guy and shortest stack called. 1st guy had pocket 10's and second guy had AQ, so I was looking good. The turn was a queen and I was still ahead until the river when another queen appeared. Yikes! Short stack won the main pot w/trip queents and my 2 pair got counterfeited for the side pot. Nothing like getting runner-runnered all in for a $500 pot to end the night. Just like online poker games, sometimes live poker seems rigged. Time to walk home to the IP.

So I get back to the IP at like 1:00 AM and still no sign of IlliniFan which has to be a good thing. We exchange texts and he makes the final table in the Binions PLO8! You can read his writeup for all the gory details, but to make a long story short he ends up getting 7th place for $1,555. Basically there was one douchebag who wouldn't do a Final Table chop, otherwise IF would have gotten ~ $3K. After he gets back to the IP @ 3:30 AM, I convinced him he should roll his winnings, including my 10%, into the WSOP event at noon later that day.
Posted by SmBoatDrinks at 4:14 PM 1 comment:

This is my "official" WSOP photo, in case anyone wants to buy me an early Christmas present. I am staring down The Grinder. Bonus points to anyone who can name any of the other pros @ my table.
Posted by SmBoatDrinks at 1:51 AM 2 comments: