Here is some excellent Q&A from some fellow FTF'ers:

What are people's thoughts about it? I'd specifically like to hear from those that make a living or atleast a large chunk of money from online poker. There are lots of threads about it on 2+2, etc., but very few of the well-informed people are letting their opinions be known. Most opinions are from people who have absolutely no clue what they're talking about. Obviously I never keep too much money online, but I have plenty of buyins right now because I've been grinding a lot lately and plan on having a very sizeable ironman bonus in July. However, this won't be very good if A) I can't withdrawal money at this point, or B) if the fish can't deposit money, so the games are completely reg infested.Thoughts and opinions? - ostornadoe


I'm fascinated that you want facts and not conjecture, yet ask other professional poker players to respond, as if THEY somehow become expert in this topic by the simple fact of their profession.

Well I ain't one of those, but perhaps 30+ years in the consumer finance industry and my past status as both an activist and a registered lobbyist for my industry may suffice?

If A) happens, move your account to another place and optionally sue your financial institution; the UIEGA specifically allows transactions in that direction (from the site to you.)

Issue B) is more a function of what people (including the people that run banks) chose to believe, and less a function of what the UIGEA causes, as evidenced by the current state of affairs online - which is already pretty "reg infested" as it applies to US players. I anticipate that some financial institutions may find a way to limit transactions from their account holders to what they believe to be "gambling site operators," but that is because they WANT to, not because they HAVE to (since actually knowing a payee is a gambling site is pretty fucking impossible unless the site is dumb enough to call itself Illegal Foreign Gambling Website, Inc. or something.)

On a non-financial industry tangent, however - there will always be European and other foreign players, and they suck so bad it takes a minimum of three US fish to equal one French idiot, so, to quote Alfred E. Neuman, "Why worry?"

PS: I've heard completely unsubstantiated and therefore highly suspect stories of financial institutions calling people in a microscopically small number of cases to inquire the source of funds being received for deposit to a player's account. In the case where the amount is less than $10k, the correct answer to this question, if it is really ever asked (which as I said I doubt) is, "Fuck off, it's none of your fucking business."

In the case where the amount exceeds $10k (or a series of similar transactions during a relatively short period of time, when combined, exceeds that amount) and if the transaction originates outside the U.S., you are required by law to answer the question. The correct answer for this question (again, in the imaginary case where it is actually asked) is "it comes from the company whose name appears as the payor in the transaction."

In the above situation, answer all questions about your identity and home address factually; they have the right - in fact, they are obligated under Federal law - to ask, and you are subject to some pretty severe penalties if you were to lie.

Finally, if asked the nature of the transaction, the answer "adult entertainment" has a nice ring to it. They are not entitled to more specificity than that. - Zerbet
Posted by SmBoatDrinks at 8:50 AM 1 comment: 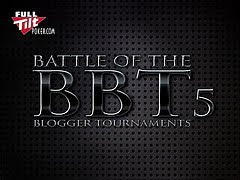 Well, there is one event left in the BBT5 for me to win my seat in the Tournament of Champions. It's tomorrow night in the Mookie, gl me!

We should have a decent turnout tonight in the Booze Cruise thanks to the free public service announcement last night on Buddy Dank Radio during the BBT5 Poker From the Rail Tourney. 21:10 ET password is "boatdrinks", so sign-up!

Speaking of the tourney last night. This was my fateful hand, which I still think was the right call given the way DDionysus played it & his range. Comments??


On the bright side, I did cash in the Daily Dollar last night! A whole net $2.50 for 4 hours of work, woot! At one point I was @ Matt Sexton's table, who was in red, but did not have a custom avatar. I was wondering if it was Mike's boy, so I looked him up & found this under Full Tilt Pros: http://www.fulltiltpoker.com/matt-sexton

"Over $9K in Career Tournament Earnings". lol - the bar is getting lower for the red pro!
Posted by SmBoatDrinks at 1:52 PM 1 comment:

Well, the PS SCOOP events did not go exactly as planned. I ended up splitting my $33 ticket into a $22 and a $11, giving me 2 of each to play over the 2 week span from what I had won during the blogger events back in January. 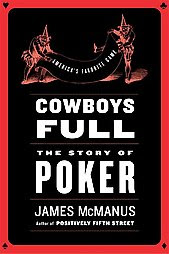 Ferguson Challenge Update – I started March with $1,889.32 and finished with $370.85. Before you say, whoa, WTF happened, or how is that possible? After a bad session on Tuesday the 20th I decided to cash out $1500 while I could. This will allow me to play another WSOP event in June. I have booked my flights and hotel for the week of June 21st.

I am currently reading Cowboys Full by James McManus. This is basically the history of poker. It’s OK, but not as enjoyable a read as Positively 5th Street.

I am looking forward to playing at least 3 SCOOP events in May on PokerStars. Seem like a long time ago in January I won tickets in all 3 of the WBCOOP tourneys I was able to play in! The SCOOP start times are not exactly ideal for us working stiffs, but this is still a good opportunity, as I have $0.00 in my PokerStars account, so hopefully I can turn my $11, $22, and $33 tickets into something of a bankroll on PS!

I am still hosting $5 tourneys every Tue & Thur on FTP @ 21:10, so sign up for the Booze Cruise, the password is boatdrinks!
Posted by SmBoatDrinks at 9:51 PM 2 comments: