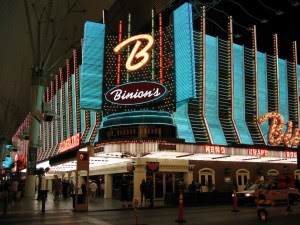 Let's just say I got my Vegas poker fix for the year. 1 min cash in a Golden Nugget Grand event, and 1 winning cash session does not make for a winning week. I felt much more comfortable in my 2nd WSOP event this year, than I did in my 1st event last year. And, if not for a brutal river beat I would have had a decent shot at getting to day 2 with some chips.
During my Binions PLO8 event, at our starting table I sat to the left of Alex Rousso. He was a nice enough fellow, and wrote much better about the Binions event than I could ever think of doing. We got embroiled in a bit of a controversy, which Alex also wrote about, in one of the 1st few hands. Alex was in seat 1, and I was in seat 2. Seat 4 and Seat 5 were involved in a hand that went to the river. Seat 4, a nice guy with a Red Sox card protector, bet the river. Seat 5 called, and seat 4 insta-mucked his hand, which was a bit suprising, especially in a hi-lo game.
Now is where the controversy starts. Seat 5 did not turn his cards over & pushed them towards the muck, as the dealer began to push the pot his way. Alex asked to see the cards, and where I come from you are required to show your cards, and the winning hand at showdown in order to win a pot on the river, so I supported Alex's request. The dealer said the player in seat 5 was not required to show his cards to win the pot. Then things turned a bit ugly between the player in Seat 5 and Alex, as Seat 5 asked why he wanted to see the cards. Alex honestly said for information, as that is a big part of the game, especially early in a tourney like this. Seat 5 said, "well that's a shitty thing to do". They went back and forth a bit, and I asked the dealer to call the floor over so we could get clarification on this.
The table wanted to keep playing, so I said fine, and ended up getting embroiled in a huge pot with the jackhole in Seat 5 where I called his pre-flop raise and ended up turning a boat for a scoop. My blood was pumping faster that hand than it has in a long time at the poker table as I explained the situation to the floor while I was trying to extract massive chips from the jackhole.
The floor ended up basically siding with the dealer, but he did add the caveat that if I thought that there was collusion involved then I had the right to stop the hand, call the floor over, and they would then show the table his hand. Well, now I could see where that could be considered "Shitty". So, basically the jackhole knew the local rule better than a few of the rest of us did, but I don't like that ruling & prefer the "Show me a winner" rule when it comes to a showdown on the river. What do you think?
Posted by SmBoatDrinks at 10:39 PM

Wow -- what a way to have the fun stomped out of a tournament.

The dealer/floor is right in casinos where I play. It's bad form to ask to see the cards for "information," but is allowed if you suspect collusion. Once Alex mucked his cards, the deal was over.

I wouldn't want to show. If the raiser auto-mucked, then I shouldn't have to show. Just my opinion, but whatever the rules are then obviously that is how it should be done.

I think the automatic feature in online poker allowing us to see mucked cards spoils us.

Oh, you can't call the bet b/c you're not in the hand on the last street? Then DEFINITELY don't ask.

Reading Alex's post, he knows he's pushing the envelope asking to see the hand - and both of you should know better and left it alone to begin with.

My point wasn't so much for information, but the fact that everywhere else I've played, be it online or live, that a winning hand always had to be shown at showdown on the river whether it went check-check, or bet-call.

I just pulled out my Robert's Rules of Poker and it states on Page 10 under The Showdown:

1. "To win any part of a pot, a player must show all of his cards faceup on the table, whether they were used in the final hand played or not."
5. "Any player who has been dealt in may request to see any hand that was eligible to participate in the showdown, even if the opponent's hand or the winning hand has been mucked."

"To win any part of a pot, a player must show all of his cards faceup on the table, whether they were used in the final hand played or not."

Not if the other guy mucks.