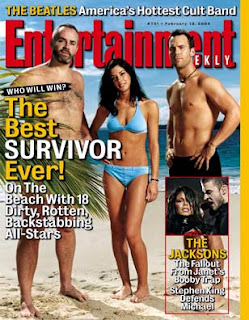 For those of you that are results based, I outlasted VeryJosie in the Final Tourney winning 40% of the prize pool, but came in 2nd in the voting for ultimate champion, by the narrowest of margins 7-6. I had accomplished my original goal of getting to the final 2, and giving myself a decent chance of winning the popular vote.
I watched the 1st few seasons of Survivor, so I knew the jist of how the game is played. After the 16 players were announced and the teams divided we were ready to go!
FISH
alcanthang
iaatg
riggs
dawn
hoy
smboatdrinks
xkm
josie


DONKEY
jordan
numb
muhctim
kat
heffmike
goat
brain
jamyhawk
The first thing I did was to send a personalized email to each member of my team:
Hey xxxx!
Glad to have you on my team. In addition to email you can reach me via AOL IM or Google Talk, "SmBoatDrinks" on both.
Good Luck!
Boat
Josie was the 1st to reply:
Hi Boat!
My aol im is veryjosie and my yahoo im is very.josie
I will definitely be in contact! This is going to be sooo much fun. Now remember, do not vote me off and I won't vote you off. You are the first one (and perhaps the last) to get this PRICELESS offer. :) And you can trust me.
See you tonight!
The only other team Fish member that replied before the 1st tourney was Dawn:
ok, cool! see ya tonight
After Hoy won immunity & Numb got voted out from Team Donkey after Event 1, I got this "personalized" email from Hoy. It felt like a long form letter he sent to each of team Fish after getting scared that the longest lasting member of the other team was just voted off :
Hi smboatdrinks.

Seeing what happened to Numb the other day after running the deepest of any of his teammates in the first Survivor Poker tournament got me doing some research, and what I found is that it looks like most members of Team Donkey had apparently already formed a "secret alliance" to all vote for Numb when their team had their first chance to vote someone out, and I'm sure they will be doing the same for their next several eliminations. I do not know if this has already happened for Team Fish -- I sincerely hope not -- and I was thinking that I would like to make a voting alliance with you. My two cents is that you and I are two of the best and most experienced blogger tournament players on our team -- with Jordan, Numb, Heff and Goat all on Team Donkey, we really lucked out there -- and thus have the best chance of helping our team not to be subject to an elimination vote by outlasting everyone from Team Donkey in one of our tournaments. Thus, it is far and away in my best interest for you to remain on the team and in the competition, at least during this first month here while we are in Team Play.

My proposal is simple. Along the lines of what the Team Donkey players have done to protect themselves from early elimination here, I would like to suggest that you and I agree not to vote for each other for elimination from our team at any point during the "Team Play" portion of Donkey Island. My idea is that for now, our alliance can stay in force just for "Team Play", and we can cross the bridge of what to do after Team Play is done if and when we get there (let's hope we both do).

Frankly, regardless of whether or not you agree to ally with me and not to vote for me for elimination, I am still going to not vote for you at all during Team Play because, as I said, I know it increases my chances of avoiding an elimination vote just by having you around and playing in these games. I would like to get your agreement on this voting alliance to help protect me as well. As I said, my plan is to keep this alliance in place only during Team Play for now, although of course I would be willing to discuss a further alliance for the Individual portion if we are both lucky enough to still be alive in this a month from now.

Are you willing to join this alliance and agree not to vote for each other at all for elimination from Donkey Island Poker during Team Play? Please let me know! I am in discussions with a few others on Team Fish as well and am trying to build a consensus for who to vote out if the need arises, just like Team Donkey did the other day.

Either way, best of luck in the Dank on Wednesday. I know you know how to win a tournament against the bloggers, and I am hopeful that you, me or someone else on our team will keep our streak alive of not having to be subjected to an elimination vote this week, but you know it is going to happen eventually. Hopefully with a little bit of forethought here we can at least agree to protect each other from elimination, at least here during the Team Play phase, when I am convinced it is in every player on our team's interests to keep the better blogger tournaments players around the hopes of avoiding another knockout vote. Hopefully you feel the same.
Thanks, let me know!
Hoyazo
I replied:
Hey Hoy!
Sounds good to me.
Congrats on the 1st Victory & Thank You for saving our asses! Hopefully I can return the favor tomorrow.
Boat
Hoy replied:
Cool beans, I definitely think it's a good plan for us while we are teammates. i will continue to try to outlast in these things. hopefully it comes down to the two of us next time tomorrow night.
thanks! youre off my vote list permanently while we are teammates.
hoy
So Hoy was beginning to take a leadership role w/Team Fish, as you can tell w/our next couple tourneys we had to vote someone off:
Hey xkm, smboatdrinks, and Josie,
Hoy here. It sounds like the four of us on copy here are on board for a voting alliance in survivor poker, which is great beacause together I think we represent the four best chances of outlasitng the other guys' longest-lasting player in every one of these tournaments that we play, which is good for us as a team without a doubt.
The rules of the alliance are simple I think (let me know if I am missing anything):
1. None of us four will vote for any other of us four for elimination at any time during the Team Play portion of the game; and
2. We should probably decide together who to vote for, to make sure that the votes are not all split such that some combination of the players not in our alliance take out one of us with just two or three votes.
From previous conversations it sounds like a number of us were already going to vote for Riggs in the earlier tournament this week if we had to, and that is who I propose we vote for tonight. He did not show up for Goat's tournament at all and really hasn't blogged or been a part of the group for ages. Hopefully we can outlast and it doesn't come to that tonight, but I suggest we all vote for Riggs together here and make sure to protect ourselves.
Best of luck tonight, everyone! Long live the alliance!
Hoy
riggs is not here again for the mookie today btw. he is doing us no good by being on this team. al is not here either, he should be our next one out as needed as he will not play much in these things.
Hey guys.
Best of luck tonight in Donkey Island Event #3. I was out late at altantic city last night so am not sure how late i will make it today but i will do what i can for the team.
as far as tonight's vote goes, if somehow Team Fish ends up having to vote to eliminate someone again, i think al is the guy this week. he has only showed up for 1 of the 2 events, and he doesnt try very hard when he is in them in any event, so i dont think the team is getting much value from having him stay on. hopefully it does not come to a vote for us tonight, but if it does, al is my vote and hopefully you guys will join me in that.
best of luck in the donkey rebuy! remember, its not about how much you buy in for, its about finding a way to amass a big stack by the end of monkey hour!
hoy
So, after 3 events we were down to 13 players, and 6 team fish, losing Numb, Riggs, and Al.
To be continued........
Posted by SmBoatDrinks at 4:14 PM

Wait! I got the exact same email from Hoy!