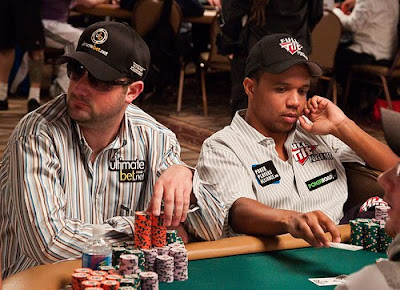 4. I am planning on playing the PLO8 WPT tourney @ Hollywood on March 13th. This will give me a good feel if I want to play the WSOP PLO8 event in June.


The Bad:
1. Ferguson Challenge Update – I started January with $1,938.02, and finished with $1,735.91. I am seriously considering withdrawing $1500 so I can play in 2 WSOP events while I am in Vegas. Any thoughts? Obviously this would set me back on my timeline to complete the Ferguson challenge, but running $0.27 up to a WSOP entry is not too shabby.

Speaking of the WSOP, I just saw this on Pauly’s blog:
The WSOP is just around the corner and the November Nine is eight plus months away (scheduled for November 6-9th).

Harrah's made some changes. Some are good. Others are neutral. A few blow. But hey, that's the WSOP. It wouldn't be what it is without someone complaining about something! But the indoor Poker Kitchen returns. The Poker Tent will finally RIP.

• Expanded footprint – The giant Pavilion Ballroom (58,000 sq. feet) will be in use this year for poker in the Rio Convention Center. The Pavilion is the largest ballroom at the Rio, and along with the famed Amazon Room (38,000 sq. feet), will make-up the playing rooms for this year’s WSOP. The entire convention space will be used.

• Expanded capacity – Along with expanded footprint, comes more poker tables. A record 295 tables were utilized last year, and this year’s configuration is still being plotted, but expected to offer about 20 percent more tables.

• No Food Tent – The outdoor food tent will now become an indoor food court experience. The Miranda Ballroom, last year used as a room for play, will be converted into a food court with a variety of popular food items for players and spectators.

• $50K Players Championship – The Chip Reese Trophy is up for grabs at the $50,000 buy-in eight-game mixed event, dubbed the Players Championship, which is being morphed from the $50K H.O.R.S.E. tournament run the past four years. This new eight-game format will serve as the true test of the game’s greatest all-around player and receive star treatment, with ESPN cameras covering the five-day event for television. Event #2 starts on Friday, May 28 at 5:00 PM.

• The 4th annual Ante Up For Africa Celebrity-Charity Tournament -- $5,000 buy-in No-Limit Hold’em celebrity and charity tournament on Saturday, July 3, (two days before the Main Event begins) featuring the opportunity for anyone age 21 or older to enter and be seated at the same table as A-list celebrities and top poker pros.

• The Ladies Only No-Limit Hold’em Championship – On Friday, June 11, featuring a $1,000 buy-in and helping to raise awareness for the Nevada Cancer Institute, the official community relations partner of the World Series of Poker.

• The Seniors Only No-Limit Hold’em Championship – On Friday, June 18 , featuring a $1,000 buy-in for all poker enthusiasts 50 years of age or older.

Posted by SmBoatDrinks at 10:00 PM

Congrats on the WSOP seat! Withdraw the 1500, take it to vegas, put it all on black and double it up! Then you can play 3 events. Do you have an idea yet of what dates you will be out there?

Looking @ being out there the week of June 21st.