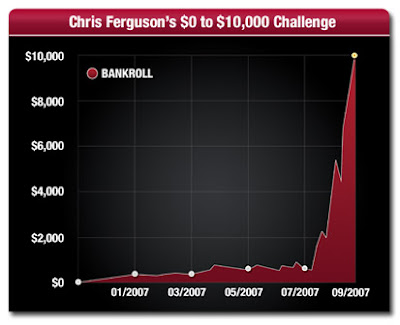 Chris Ferguson Challenge
In September of 2007 Chris finally achieved his $0 to $10,000 goal. Always true to his word, he donated his winnings to the Save the Children Foundation upon reaching the $10K mark.
Here's how he did it:
Starting with nothing but a Full Tilt Poker account, Chris played in Freerolls until he earned enough to graduate to games with real-money buy-ins. From that point on, he adhered to a strict set of guidelines to build up his bankroll:
He never bought into a cash game or a Sit & Go for more than 5 percent of his total bankroll; the only exception was at the lowest limits: he was allowed to buy into any game with a buy-in of $2.50 or less
He didn’t buy into any multi-table tournaments for more than 2 percent of his total bankroll; the only exception was $1 MTTs
If at any time during a No-Limit or Pot-Limit cash-game session the money on the table represented more than 10 percent of his total bankroll, he had to leave the game when the blinds reached him
Getting started wasn’t easy. In fact, it took more than seven months of steady play until he got his bankroll to stabilize at about $6.50. Undaunted, Chris maintained his discipline and dedication and continued with his challenge. Then, on November 26th, 2006, Chris made a major breakthrough. He turned a $1 tournament buy-in into $104 in prize money when he finished second in a 683-player tournament. Even with that huge bankroll boost, it still took Chris nine more months of hard work to reach $10K. But because he strictly adhered to the bankroll management strategy that he’d set for himself, Chris achieved his goal the following September.
Posted by SmBoatDrinks at 9:34 PM

GL smboat!!! I started somewhere around the same time as ferguson (I didn't find out until way later that he was doing the same thing as me) and I still haven't reached the 10k goal. The biggest difference was that I was learning (was.... ummmm.... still am :) how to play at the same time, so it's taken me waaay longer than it should. If I were to start over again now, I could probably do it in a year, maybe less. I definitely expect to be there in the next few months.
The best trick I can give you for starting out is to play playchip games and go into the 8:40pm 500k playchip freeroll. It's the easiest $2 you will ever make, as it only gets about 50 runners and top 18 pay. With your skill, it should take less than a week to work up about 2-3 million playchips, then work up a decent starting roll with 6 chances in the 500k. If you want to discuss further, give me a yell :)

Cool. Thanks for the tip Blaargh! I'll give the play chip thing a shot starting tonight. I'm also in 3 fantasty freerolls over the next week.