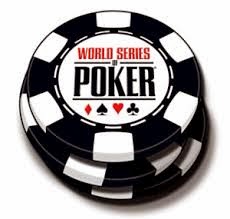 Won a WSOP Prize package last week!  It came down to the final table in the 10th & last event of the season in our Northern Cincinnati Poker Club.

Played pretty solid all season long.  I was in 1st place through 7 events.  I had a family conflict for event 8 & my sub only finished in 14th place, so I dropped to 3rd place.  Managed to finish 7th in event 9, and held a 1 point lead for 3rd place coming into the final event.

There were 3 players immediately behind me in the standings, who had a legitimate shot to pass me for one of the prize packages.  One went out relatively early, and another on the final table bubble.  I played pretty solid, but not too tight.  My biggest hand of the night was when I flopped trip 6's and my 10 kicker actually played to cripple a 62.

My last threat was short stacked coming to the final table, but managed to double up during a coin flip hand when a K hit the river.  Things got a little tense, but he ended up going out 9th & my seat was clinched.  I ended up 5th & winning $80.

After spending ~ a week in Vegas for several straight years, I hadn't been able to make it out the last couple.  Thus I am super-pumped to get back out there next month.  Airline & hotel prices are significantly higher than the last time I was in Vegas, but I'm booked & ready to go!

Posted by SmBoatDrinks at 9:28 PM

Did you consider picking the most recommended Bitcoin exchange service: YoBit.

Are you still interested in poker? If so, you may want a poker mentor ?