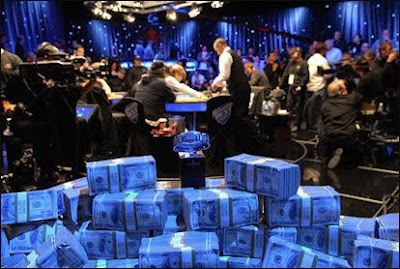 • I took 2nd place in the November NCPC Event #4, and am still in 1st place with 6 events remaining.

• I played in a $50 tourney @ a former co-workers house the day after Thanksgiving and ended up in a 3-way chop for $265. Gave back some of it afterward though playing $1/$2 Stud.

• On November 6th I checked out the new Hollywood Casino (former Argosy) for the 1st time. I played in a $125 NL Bounty Tournament. I knocked out a couple players for $20 each, but ended up missing on a straight flush draw and didn’t cash. The WPT Poker Room is definitely a lot bigger & nicer than the old one.

• I just completed Gus Hansen’s Every Hand Revealed and am halfway through Daniel Negreanu’s Power Hold’Em Strategy. I would recommend both, as they take different approaches toward improving your game.
Posted by SmBoatDrinks at 4:44 PM

Nice score in the Daily Double!

Hope the booze cruise is still going strong. I'll try and play over the Xmas break to see if I can hit some 2/3 outers to knock you out :)

I'm still slowly plodding along in my challenge... starting from scratch with 0 poker skills is a pain in the ass...